Nowadays, anomaly detection algorithms (also known as outlier detection) are gaining popularity in the data mining world. Why? Simply because they catch those data points that are unusual for a given dataset.

What Is Anomaly Detection?

Anomaly detection is a method used to detect something that doesn’t fit the normal behavior of a dataset. In other words, anomaly detection finds data points in a dataset that deviates from the rest of the data.

Let’s say you possess a saving bank account and you mostly withdraw 5000 $. However, one day 20000 $ is withdrawn from your saving account.

This is a very unusual activity as mostly 5000 $ is deducted from your account. The transaction is abnormal for the bank. It is an outlier. 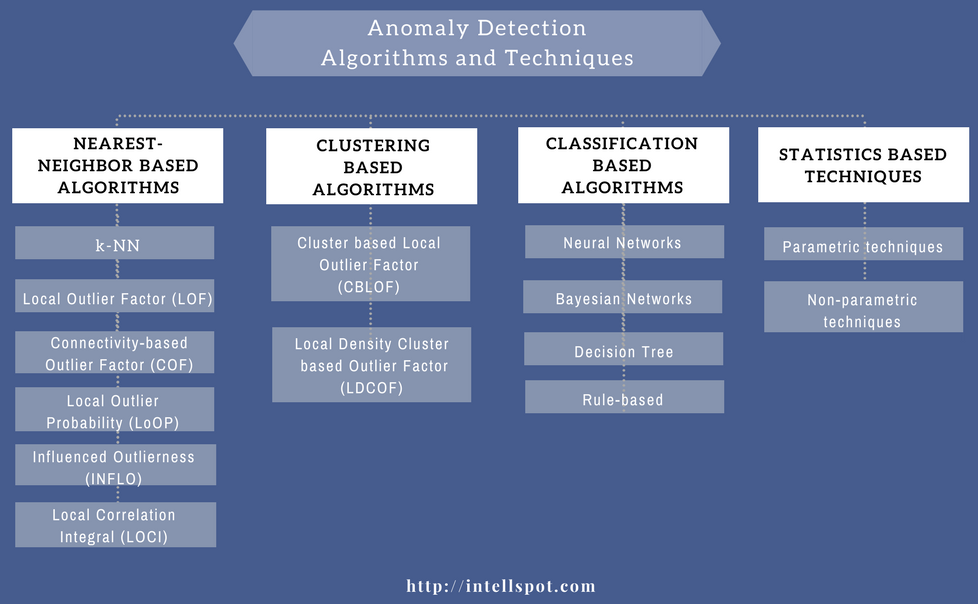 Outliers and irregularities in data can usually be detected by different data mining algorithms. For example, algorithms for clustering, classification or association rule learning.

It is called supervised learning because the data scientist act as a teacher who teaches the algorithm what conclusions it should come up with. The data science supervises the learning process.

On the other hand, unsupervised learning includes the idea that a computer can learn to discover complicated processes and outliers without a human to provide guidance.

Let’s see the some of the most popular anomaly detection algorithms.

k-NN is one of the simplest supervised learning algorithms and methods in machine learning. It stores all of the available examples and then classifies the new ones based on similarities in distance metrics.

K-nearest neighbor mainly stores the training data. It doesn’t do anything else during the training process. That’ s why it is lazy.

How does k-NN know what’s closer?

It uses density-based anomaly detection methods. For continuous data (see continuous vs discrete data), the most common distance measure is the Euclidean distance. For discrete data, Hamming distance is a popular metric for the “closeness” of 2 text strings.

The pick of distance metric depends on the data.

It has many applications in business and finance field. For example, k-NN helps for detecting and preventing credit card fraudulent transactions.

The LOF is a key anomaly detection algorithm based on a concept of a local density. It uses the distance between the k nearest neighbors to estimate the density.

That is why LOF is called a density-based outlier detection algorithm. In addition, as you see, LOF is the nearest neighbors technique as k-NN.

LOF is computed on the base of the average ratio of the local reachability density of an item and its k-nearest neighbors.

K-means is a very popular clustering algorithm in the data mining area. It creates k groups from a set of items so that the elements of a group are more similar.

Just to recall that cluster algorithms are designed to make groups where the members are more similar. In this term, clusters and groups are synonymous.

In K-means technique, data items are clustered depending on feature similarity.

One of the greatest benefits of k-means is that it is very easy to implement. K-means is successfully implemented in the most of the usual programming languages that data science uses.

If you are going to use k-means for anomaly detection, you should take in account some things:

Is k-means supervised or unsupervised? It depends, but most data science specialists classify it as unsupervised. The reason is that, besides specifying the number of clusters, k-means “learns” the clusters on its own. k-means can be semi-supervised.

A support vector machine is also one of the most effective anomaly detection algorithms. SVM is a supervised machine learning technique mostly used in classification problems.

It uses a hyperplane to classify data into 2 different groups.

Just to recall that hyperplane is a function such as a formula for a line (e.g. y = nx + b).

SVM determines the best hyperplane that separates data into 2 classes.

To say it in another way, given labeled learning data, the algorithm produces an optimal hyperplane that categorizes the new examples.

When it comes to anomaly detection, the SVM algorithm clusters the normal data behavior using a learning area. Then, using the testing example, it identifies the abnormalities that go out of the learned area.

When it comes to modern anomaly detection algorithms, we should start with neural networks.

The primary goal of creating a system of artificial neurons is to get systems that can be trained to learn some data patterns and execute functions like classification, regression, prediction and etc.

What makes them very helpful for anomaly detection in time series is this power to find out dependent features in multiple time steps.

The above 5 anomaly detection algorithms are the key ones. However, there are other techniques. Here is a more comprehensive list of techniques and algorithms.

The following comparison chart represents the advantages and disadvantages of the top anomaly detection algorithms. Download it here in PDF format. 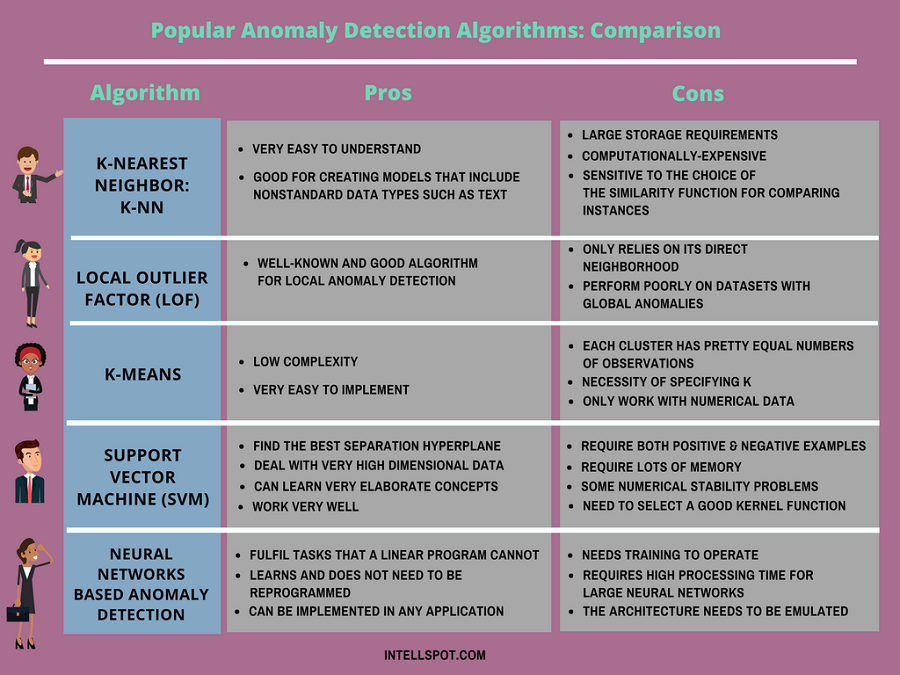 Although there is a rising interest in anomaly detection algorithms, applications of outlier detection are still limited to areas like bank fraud, finance, health and medical diagnosis, errors in a text and etc.


However, in our growing data mining world, anomaly detection would likely to have a crucial role when it comes to monitoring and predictive maintenance.

Data scientists and machine learning engineers all over the world put a lot of efforts to analyze data and to use various kind of techniques that make data less vulnerable and more secure.