In statistics, many bivariate data examples can be given to help you understand the relationship between two variables and to grasp the idea behind the bivariate data analysis definition and meaning.


Bivariate analysis is a statistical method that helps you study relationships (correlation) between data sets. Many businesses, marketing, and social science questions and problems could be solved using bivariate data sets.

We have bivariate data when we studying two variables. These variables are changing and are compared to find the relationships between them.

For example, if you are studying a group of students to find out their average math score and their age, you have two variables (math score and age).

If you are studying only one variable, for example only math score for these students, then we have univariate data.

When we are examining bivariate data, the two variables could depend on each other. One variable could influence another. In this case, we say that the bivariate data has:

A classical example of dependent and independent variables are age and heights of the babies and toddlers. When age increases, the height also increases.

Let’s move on to some real-life and practical bivariate data examples.

Look at the following bivariate data table. It represents the age and average height of a group of babies and kids.

Commonly, bivariate data is stored in a table with two columns.

There are 2 types of relationship between the dependent and independent variable:

So, we use bivariate data to compare two sets of data and to discover any relationships between them.

Bivariate analysis allows you to study the relationship between 2 variables and has many practical uses in the real life. It aims to find out whether there exists an association between the variables and what is its strength.

Bivariate analysis also allows you to test a hypothesis of association and causality. It also helps you to predict the values of a dependent variable based on the changes of an independent variable.

Let’s say you have to study the relationship between the age and the systolic blood pressure in a company. You have a sample of 10 workers aged thirty to fifty-five years. The results are presented in the following bivariate data table.

Now, we need to display this table graphically to be able to make some conclusions.

Bivariate data is most often displayed using a scatter plot. This is a plot on a grid paper of y (y-axis) against x (x-axis) and indicates the behavior of given data sets.

Scatter plot is one of the popular types of graphs that give us a much more clear picture of a possible relationship between the variables.

Let’s build our Scatter Plot based on the table above: 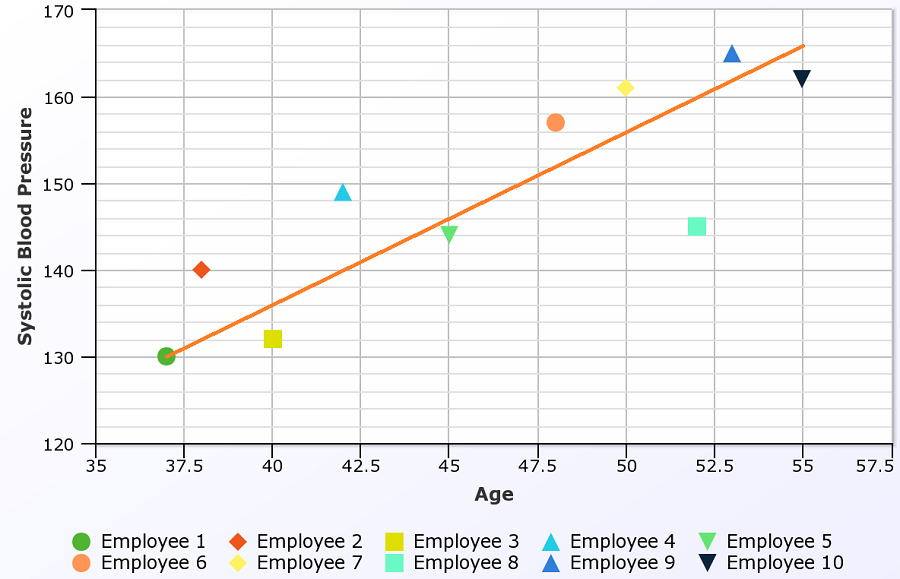 The above scatter plot illustrates that the values seem to group around a straight line i.e it shows that there is a possible linear relationship between the age and systolic blood pressure.

You can create scatter plots very easily with a variety of free graphing software available online.

What does this graph show us?

The line that you see in the graph is called “line of best fit” (or the regression line). The line of best fit aims to answer the question whether these two variables correlate. It can be used to help you determine trends within the data sets.

Furthermore, the line of best fit illustrates the strength of the correlation.


If the data points are spread quite far away from the line of best fit, we say we have a weak correlation. More on scatter plots you can find in our post “what does a scatter plot show“.

We constated that in our example, there is a positive and strong linear relationship between age and blood pressure. However, how strong is that relationship? What is its strength?

This is where the correlation coefficient comes to answer this question.

All you need to do is to use a free or premium calculator such as those on www.socscistatistics.com . When we put our bivariate data on this calculator we got the following result:

The value of the correlation coefficient (R) is 0.8435. It shows a strong positive correlation.

Now, let’s calculate the equation of the regression line (the best fit line) to find out the slope of the line.

For that purpose let’s remind the simple linear regression equation:

Again, we will use the same online software (socscistatistics.com) to calculate the linear regression equation. The result is:

So, from the above bivariate data analysis example that includes workers of the company, we can say that blood pressure increased as the age increased. This indicates that age is a significant factor that influences the change of blood pressure.

Other popular positive bivariate data correlation examples are: temperature and the amount of the ice cream sales, alcohol consumption and cholesterol levels, weights and heights of college students, and etc.

The below bivariate data table shows the number of student absences and their final grades in a class.

It is quite obvious that these two variables have a negative correlation between them.

When the number of student absences increases, the final grades decrease.

Now, let’s plot the bivariate data from the table on a scatter plot and to create the best-fit line: 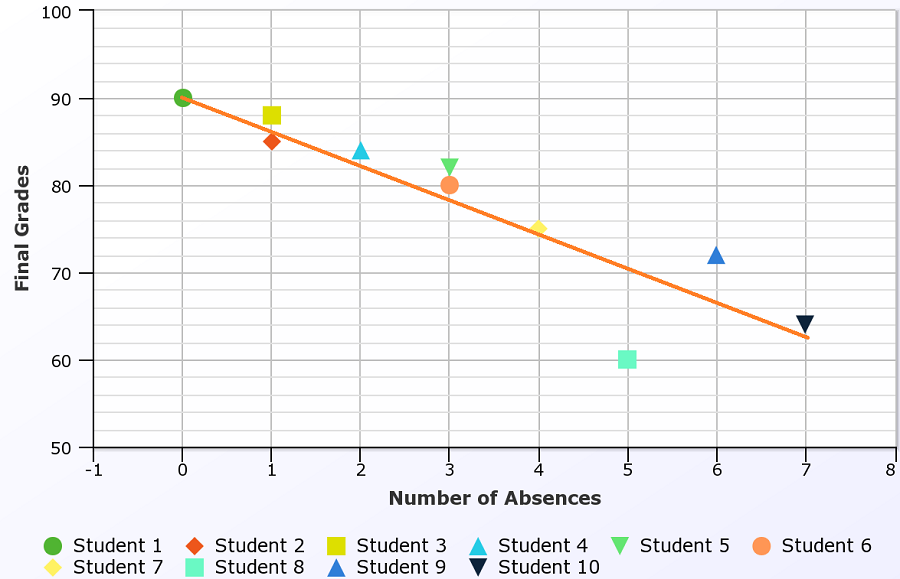 Note how the regression line looks – it has a downward slope.

This downward slope indicates there is a negative linear association.

We can calculate the correlation coefficient and linear regression equation. Here are the results:

We can conclude that the least number of lessons the students skip, the higher grade could be reached.

The above bivariate data examples aim to help you understand better how does the bivariate analysis work.

Analyzing two variables is a common part of the inferential statistics types and calculations. Many business and scientific investigations include only two continuous variables.

The main questions that bivariate analysis has to answer are:

Sometimes it is very logical to conclude that there is a causal link between 2 variables such as kid’s age and hight.


However, is there a link between childhood obesity and incomes for families? This is where bivariate analysis can shine.

If you need other practical examples in the area of management and analysis, our posts Venn diagram examples and decision tree examples might be helpful for you.