When it comes to visualizing a summary of a large data in 5 numbers, many real-world box and whisker plot examples can show you how to solve box plots.

As many other graphs and diagrams in statistics, box and whisker plot is widely used for solving data problems. Believe it or not,  interpreting and reading box plots can be a piece of cake.

A box and whisker plot (also known as a box plot) is a graph that represents visually data from a five-number summary. These numbers are median, upper and lower quartile, minimum and maximum data value (extremes).

Don’t panic, these numbers are easy to understand. Look at the following example of box and whisker plot: 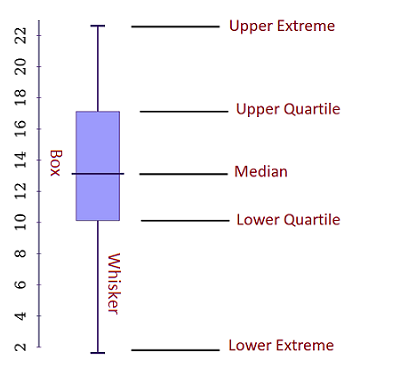 So, there are a couple of things, you should know in order to work with box plots:

To put it in another way, we have 3 key points. The first is the middle point (the median). The others are the middle points of the two halves. These three points divide the data set into quarters, that we call “quartiles”.

We will make the things clearer with a simple real-world example. It also illustrates the steps for solving a box and whisker plot problem.

Suppose you have the math test results for a class of 15 students. Here are the results:

It is hard to say what is the middle point (the median) because the value points are not ordered.

Step 1: Order the data points from least to greatest.

Step 2: Find the median of the data:

This is an odd set of data – you have 15 data points. It means the middle point is 80 as there are 7 data points above it and 7 numbers below.

More on how to calculate median, you can see on our post descriptive statistics examples.

Step 3: Find the middle points of the two halves divided by the median (find the upper and lower quartiles).

This is the easiest part. You need to find the largest and smallest data values.

Now we are absolutely ready to draw our box and whisker plot.

As you see, the plot is divided into four groups: a lower whisker, a lower box half, an upper box half, and an upper whisker. Each of those groups shows 25% of the data because we have an equal amount of data in each group.

The box and whisker plot shows that 50% of the students have scores between 70 and 88 points.

Suppose an IT company has two stores that sell computers. The company recorded the number of sales each store made each month. In the past 12 months, we have the following numbers of sold computers:

In order to compare the two stores sales performance, we will make two box and whisker plots, one for Store 1 and one for Store 2.

First, we put the data points in ascending order.

Now, we need to find the median. However, this is an even set of data. There isn’t only one middle point. The middle in our case belongs to sixth + seventh data points e.g. 250 and 290.

And the formula for the median in an even data set is:

Now let’s see what happens with the lower and upper quartiles in an even data set:

Now, we are ready to draw our comparative double box and whisker plot example:

These results tell us that Store 2 consistently sells more computers than Store 1.

How to create box and whisker plots?

Nowadays, you have plenty of good choices. Depending on your needs, you can create them with a free graphing software such as:

Or you can use powerful premium software such as:

Of course, you can draw them with Microsoft products such as:

Finally, just use a sheet of paper or a whiteboard to draw your box plot.

The above box and whisker plot examples aim to help you understand better how to solve them.

Box plots are among the most used types of graphs in the business, statistics and data analysis.

It is especially useful when you want to see if a distribution is skewed and whether there are potential unusual data values (outliers) in a given dataset.

A box plot is a great way of summarizing data set measured on an interval scale (see interval data examples).

It has many advantages and benefits and the most important of them are: