If you are wondering what are the different types of graphs and charts, their uses and names, this page summarizes them with examples and pictures.

As the different kinds of graphs aim to represent data, they are used in many areas such as: in statistics, in data science, in math, in economics, in business and etc.


Every type of graph is a visual representation of data on diagram plots (ex. bar, pie, line chart) that show different types of graph trends and relationships between variables.

Although it is hard to tell what are all the types of graphs, this page consists all of the common types of statistical graphs and charts (and their meanings) widely used in any science.

A line chart graphically displays data that changes continuously over time. Each line graph consists of points that connect data to show a trend (continuous change). Line graphs have an x-axis and a y-axis. In the most cases, time is distributed on the horizontal axis.

The following line graph shows annual sales of a particular business company for the period of six consecutive years: 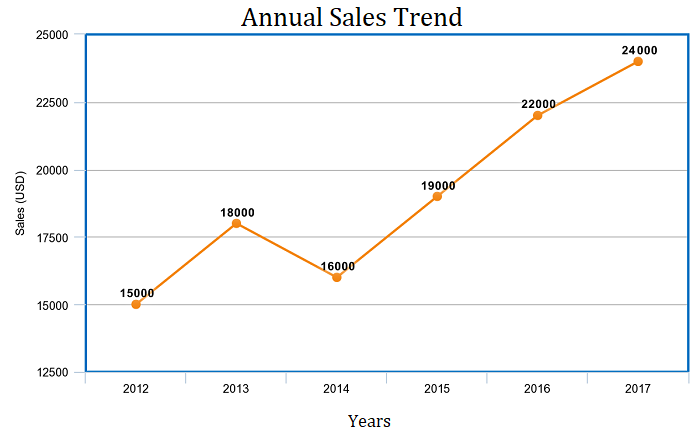 Note: the above example is with 1 line. However, one line chart can compare multiple trends by several distributing lines.

Bar charts represent categorical data with rectangular bars (to understand what is categorical data see categorical data examples). Bar graphs are among the most popular types of graphs and charts in economics, statistics, marketing, and visualization in digital customer experience. They are commonly used to compare several categories of data.

Each rectangular bar has length and height proportional to the values that they represent.

One axis of the bar chart presents the categories being compared. The other axis shows a measured value.

The bar chart below represents the total sum of sales for Product A and Product B over three years. 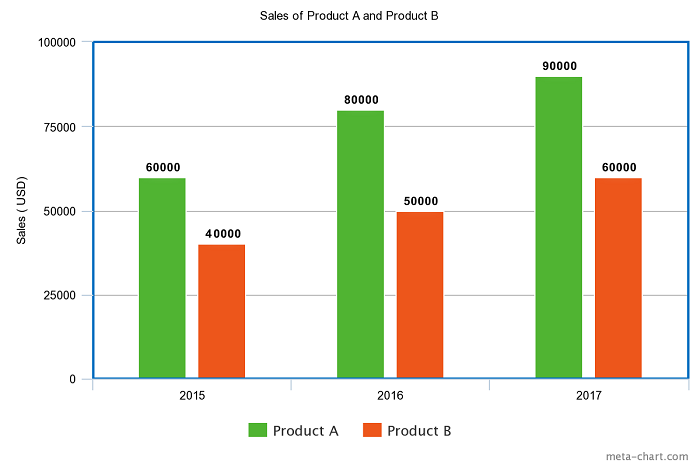 The bars are 2 types: vertical or horizontal. It doesn’t matter which kind you will use. The above one is a vertical type.

When it comes to statistical types of graphs and charts, the pie chart (or the circle chart) has a crucial place and meaning. It displays data and statistics in an easy-to-understand ‘pie-slice’ format and illustrates numerical proportion.

Each pie slice is relative to the size of a particular category in a given group as a whole. To say it in another way, the pie chart brakes down a group into smaller pieces. It shows part-whole relationships.

The pie chart below represents the proportion of types of transportation used by 1000 students to go to their school. 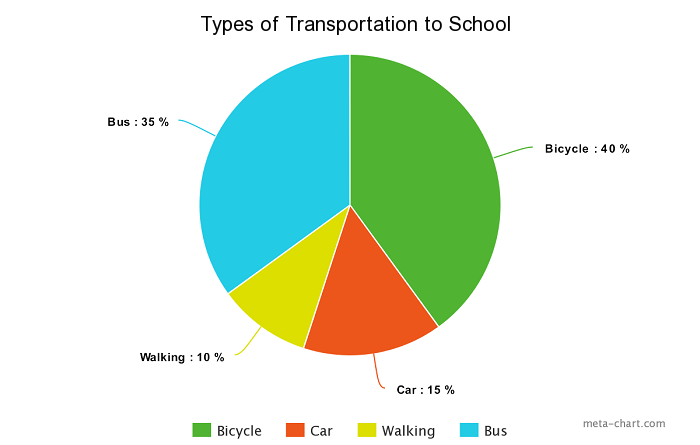 The histogram displays a frequency distribution (shape) of a data set. At first glance, histograms look alike to bar graphs. However, there is a key difference between them. Bar Chart represents categorical data and histogram represent continuous data.

The histogram below represents per capita income for five age groups. 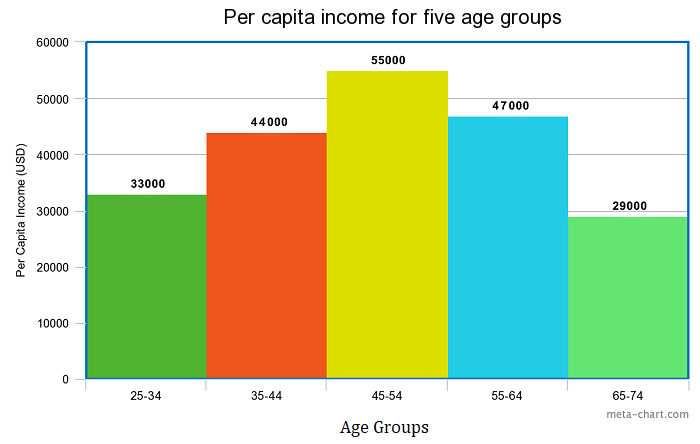 Histograms are very widely used in statistics, business, and economics.

The scatter plot is an X-Y diagram that shows a relationship between two variables. It is used to plot data points on a vertical and a horizontal axis. The purpose is to show how much one variable affects another.

Usually, when there is a relationship between 2 variables, the first one is called independent. The second variable is called dependent because its values depend on the first variable.

Scatter plots also help you predict the behavior of one variable (dependent) based on the measure of the other variable (independent).

The below Scatter plot presents data for 7 online stores, their monthly e-commerce sales, and online advertising costs for the last year. 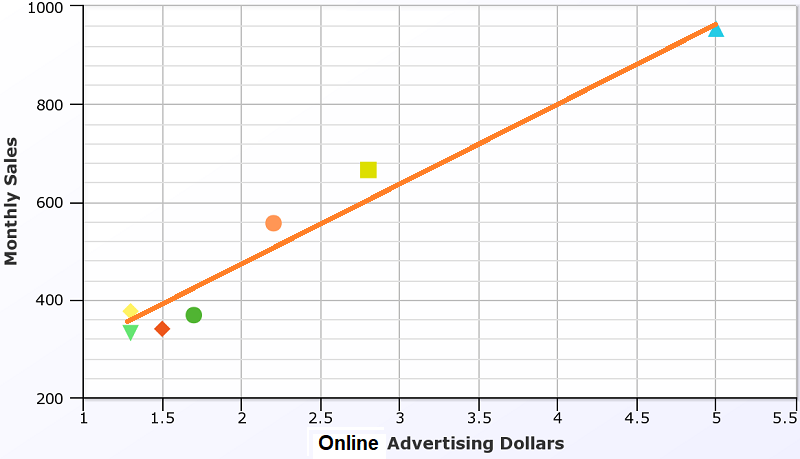 The orange line you see in the plot is called “line of best fit” or a “trend line”. This line is used to help us make predictions that are based on past data.

The Scatter plots are used widely in data science and statistics. They are a great tool for visualizing linear regression models.

More examples and explanation for scatter plots you can see in our post what does a scatter plot show and simple linear regression examples.

Venn Diagram is one of the types of graphs and charts used in scientific and engineering presentations, in computer applications, in maths, and in statistics.

The basic structure of the Venn diagram is usually overlapping circles. The items in the overlapping section have specific common characteristics. Items in the outer portions of the circles do not have common traits.

The following science example of Venn diagram compares the features of birds and bats. 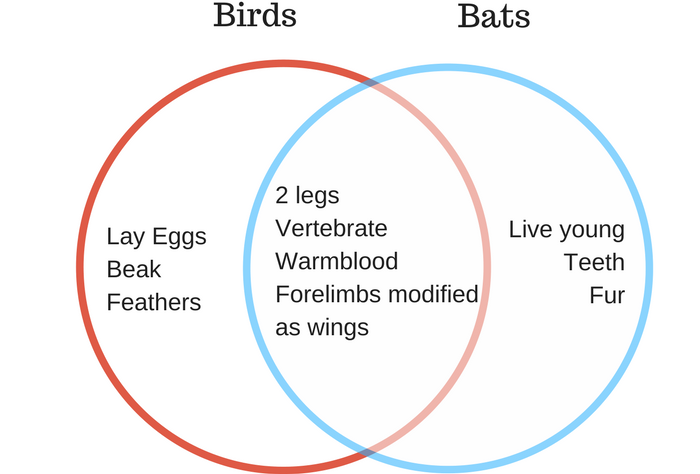 Area charts show the change in one or several quantities over time. They are very similar to the line chart. However, the area between axis and line are usually filled with colors.

The area chart below shows quarterly sales for product categories A and B for the last year. 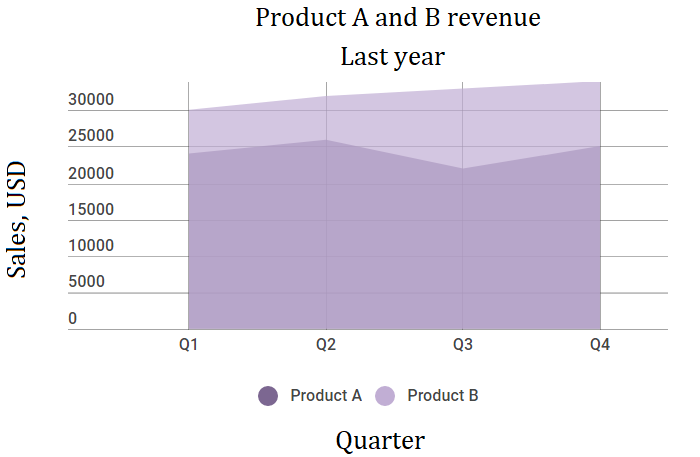 This area chart shows you a quick comparison of the trend in the quarterly sales of Product A and Product B over the period of the last year.

The Spline Chart is one of the most widespread types of graphs and charts used in statistics. It is a form of the line chart that represent smooth curves through the different data points.

The following spline chart example shows sales of a company through several months of a year: 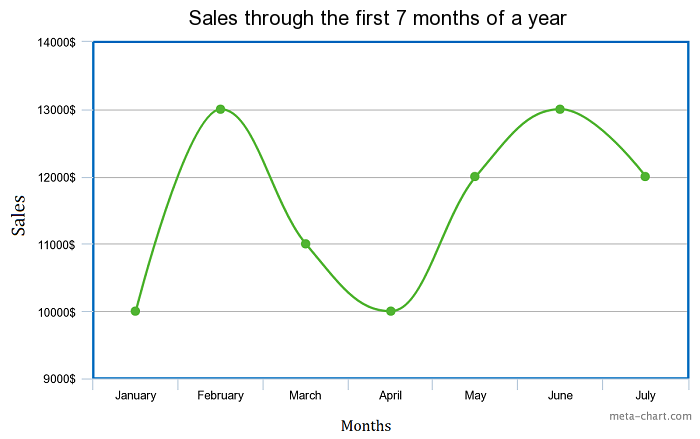 A box and whisker chart is a statistical graph for displaying sets of numerical data through their quartiles. It displays a frequency distribution of the data.

The box and whisker chart helps you to display the spread and skewness for a given set of data using the five number summary principle: minimum, maximum, median, lower and upper quartiles. The ‘five-number summary’ principle allows providing a statistical summary for a particular set of numbers. It shows you the range (minimum and maximum numbers), the spread (upper and lower quartiles), and the center (median) for the set of data numbers.

A very simple figure of a box and whisker plot you can see below: 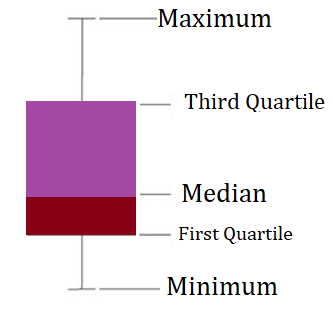 The table and box-and-whisker plots below shows test scores for Maths and Literature for the same class. 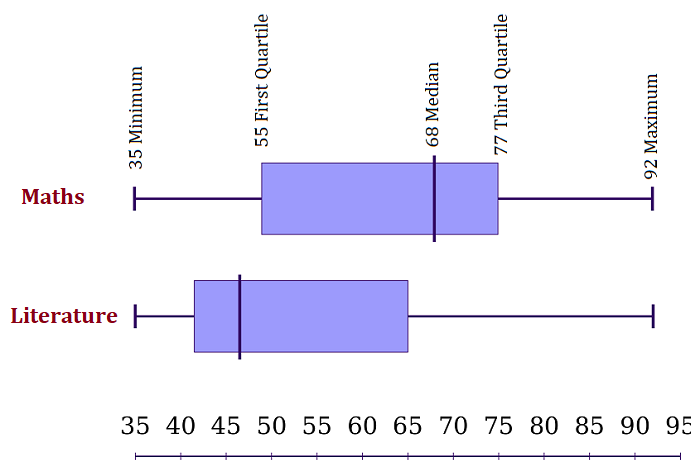 Box and Whisker charts have applications in many scientific areas and types of analysis such as statistical analysis, test results analysis, marketing analysis, data analysis, and etc.

Bubble charts are super useful types of graphs for making a comparison of the relationships between data in 3 numeric-data dimensions: the Y-axis data, the X-axis data, and data depicting the bubble size.

Bubble charts are very similar to XY Scatter plots but the bubble chart adds more functionality – a third dimension of data that can be extremely valuable.

Both axes (X and Y) of a bubble chart are numeric.

The bubble chart below shows the relationship between Cost (X-Axis), Profit (Y-Axis), and Probability of Success (%) (Bubble Size). 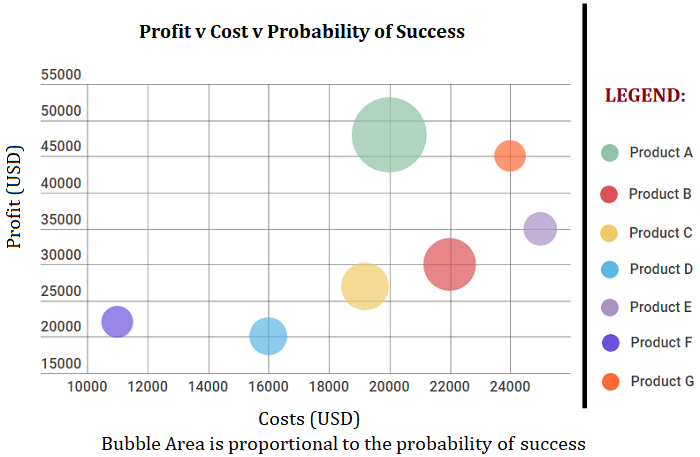 The pictograph or a pictogram is one of the more visually appealing types of graphs and charts that display numerical information with the use of icons or picture symbols to represent data sets.

They are very easy to read statistical way of data visualization. A pictogram shows the frequency of data as images or symbols. Each image/symbol may represent one or more units of a given dataset.

The following pictographic represents the number of computers sold by a business company for the period from January to March.

Dot plot or dot graph is just one of the many types of graphs and charts to organize statistical data. It uses dots to represent data. A Dot Plot is used for relatively small sets of data and the values fall into a number of discrete categories.

If a value appears more than one time, the dots are ordered one above the other. That way the column height of dots shows the frequency for that value.

Suppose you have a class of 26 students. They are asked to tell their favorite color. The dot plot below represents their choices: 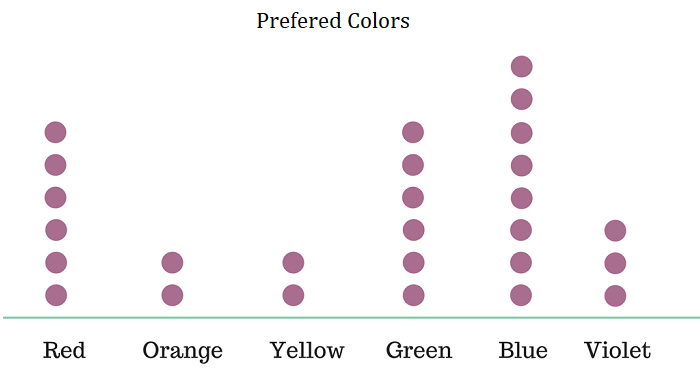 It is obvious that blue is the most preferred color by the students in this class.

A radar chart is one of the most modern types of graphs and charts – ideal for multiple comparisons. Radar charts use a circular display with several different quantitative axes looking like spokes on a wheel. Each axis shows a quantity for a different categorical value.

For example, we can compare employee’s performance with the scale of 1-8 on subjects such as Punctuality, Problem-solving, Meeting Deadlines, Marketing Knowledge, Communications. A point that is closer to the center on an axis shows a lower value and a worse performance. 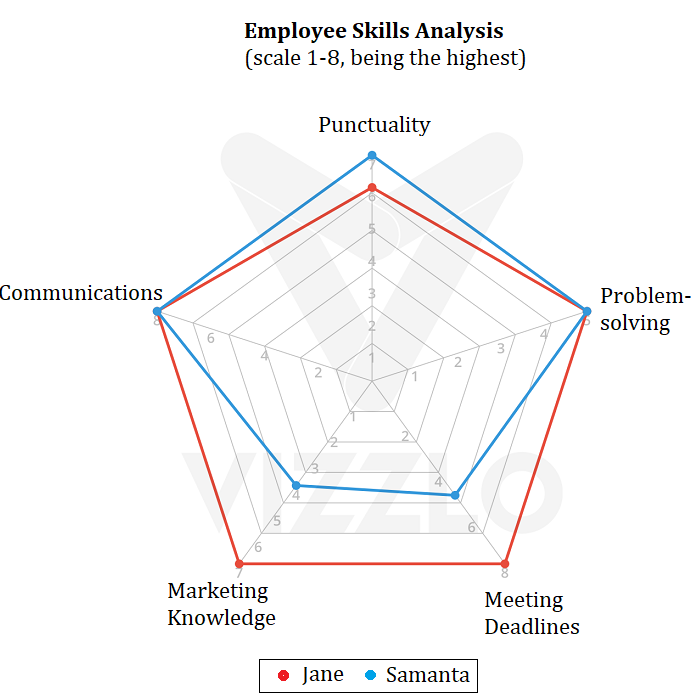 It is obvious that Jane has a better performance than Samanta.

When it comes to easy to understand and good looking types of graphs and charts, pyramid graph has a top place.

A pyramid graph is a chart in a pyramid shape or triangle shape. These types of charts are best for data that is organized in some kind of hierarchy. The levels show a progressive order.

A classic pyramid graph example is the healthy food pyramid that shows fats, oils, and sugar (at the top) should be eaten less than many other foods such as vegetables and fruits (at the bottom of the pyramid). 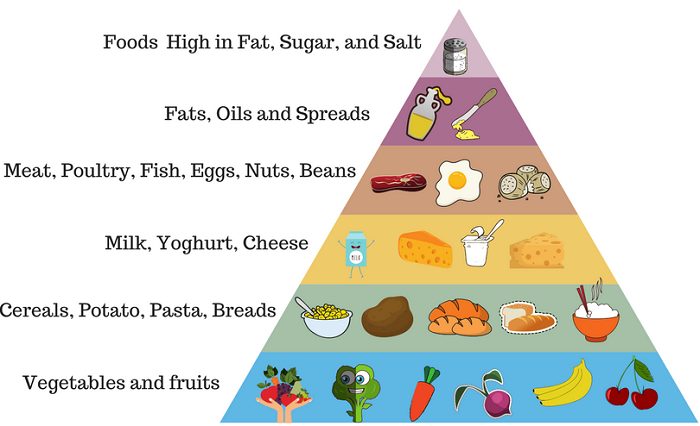 You might know that choosing the right type of chart is some kind of tricky business.

Practically, the choice depends on 2 major things: on the kind of analysis you are you want to perform and on the type of data you have.


Commonly, when we aim to facilitate a comparison, we use a bar chart or radar chart. When we want to show trends over time, we use a line chart or an area chart and etc.

Anyway, you have a wide choice of types of graphs and charts. Used in the right way, they are a powerful weapon to help you make your reports and presentations both professional and clear.

What are your favorite types of graphs and charts? Share your thoughts on the field below.